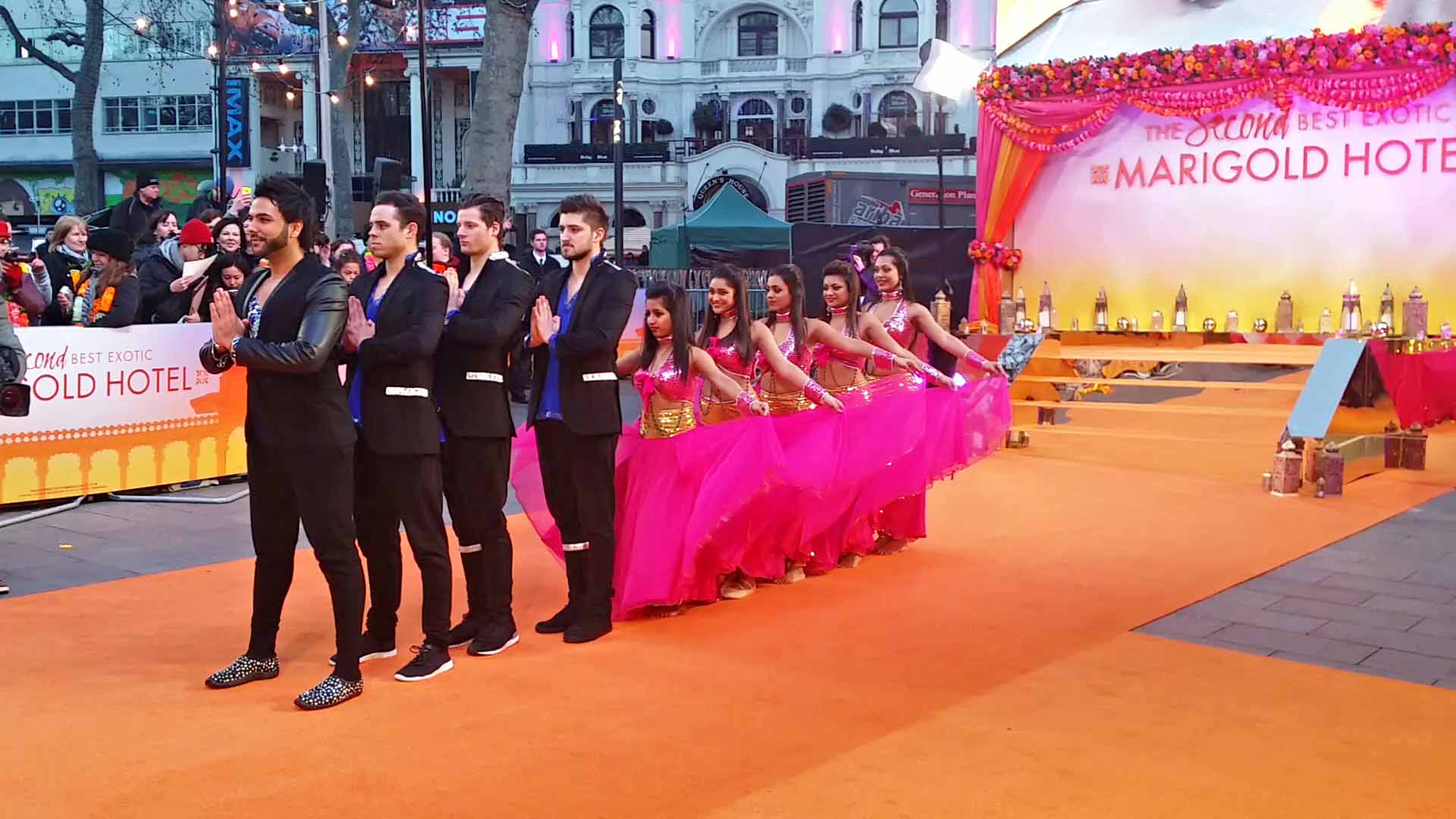 Our KBM champions who won the national dance competition to perform at the premiere were joined by the maestro himself and the KSPARK dancers to put on a wow factor dance performance in front of the press, crowds of fans and dignitaries. The team were also treated to VIP tickets to watch the film and were amongst the first in the world to view the film before its public release. The Marigold hotel premiere was supporting the CTBF the leading UK charity for Cinema, Film and TV professionals, supporting those in times of need, and running charity fundraising events including the annual Royal Film Performance™

In addition the best exotic premiere was a Royal affair with the Prince of Wales and Duchess of Cornwall in attendance. Karan Pangali on the event celebrated, ‘A very proud moment to be sharing cinema seats with Prince Charles, the talented cast and crew of the film and my incredible students and dancers. To be chosen to represent Bollywood dance at the Odeon Leicester Square for the world premiere was an absolute honour. It’s a testament to the dedication and discipline of our KBM students and their dance training, we are still buzzing!’

The KSPARK team were also invited to the official Second Best Exotic Marigold Hotel after party at the former grand hotel, 8 Northumberland Avenue. The production team enjoyed the premiere performance so much that they asked KSPARK to perform again at the after party. The cast and crew were full of compliments regarding the performance and it surely got the guests in the mood to join the dance floor.

Everyone enjoyed the spectacular Royal Film Performance of John Madden’s THE SECOND BEST EXOTIC MARIGOLD HOTEL at the Odeon Leicester Square, London. Guests, filmmakers and stars, and TRH The Prince of Wales and The Duchess of Cornwall all walked the flower bedecked, ‘marigold’ carpet before watching the World Premiere of the eagerly awaited sequel.

Here are some exclusive pictures from the Hollywood world premiere at Odeon Leicester Square: 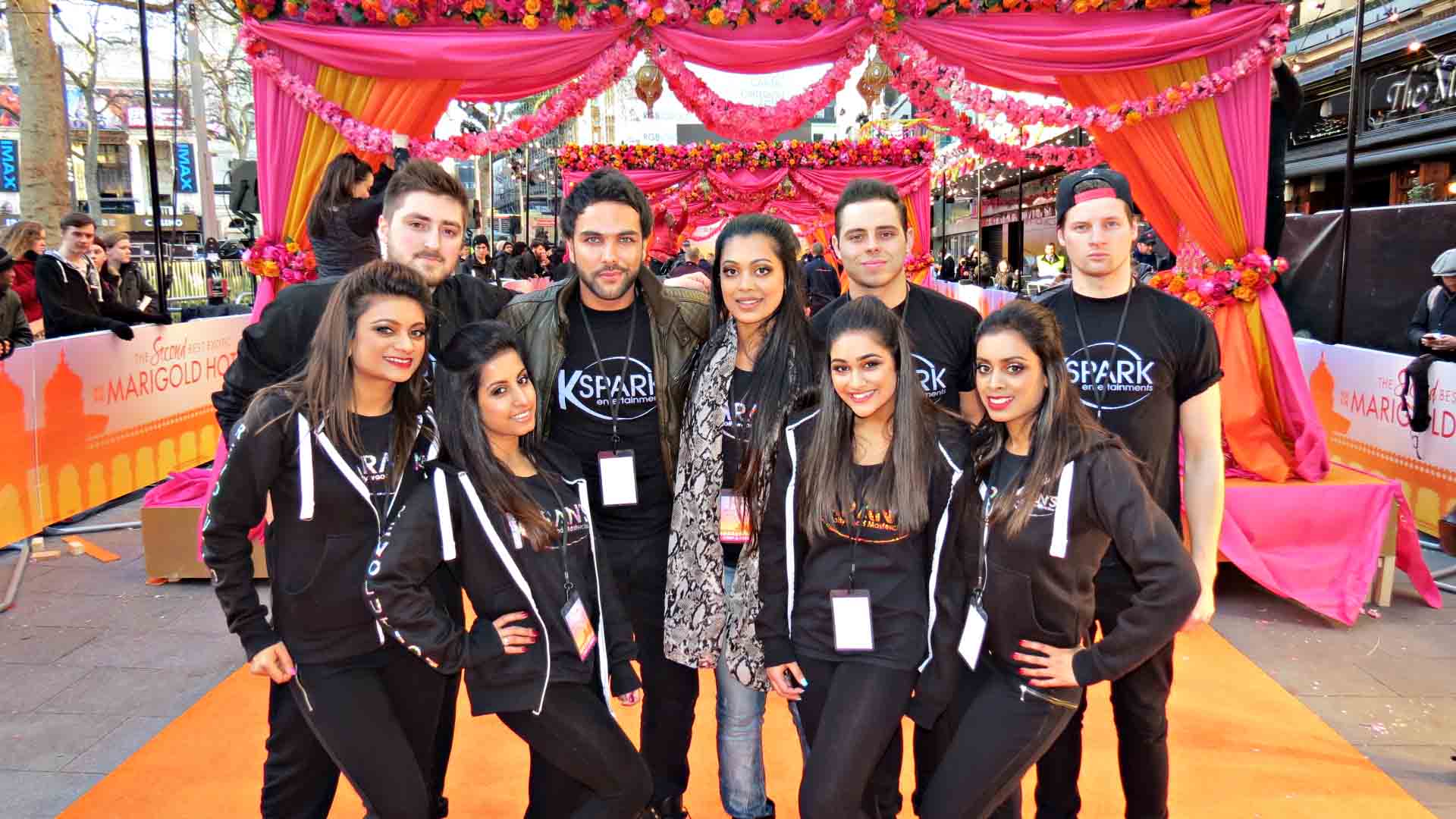 Above: Karan Pangali, dance students of Karan’s Bollywood Masterclass and the KSPARK dancers pose after rehearsals on the gorgeous orange carpet. 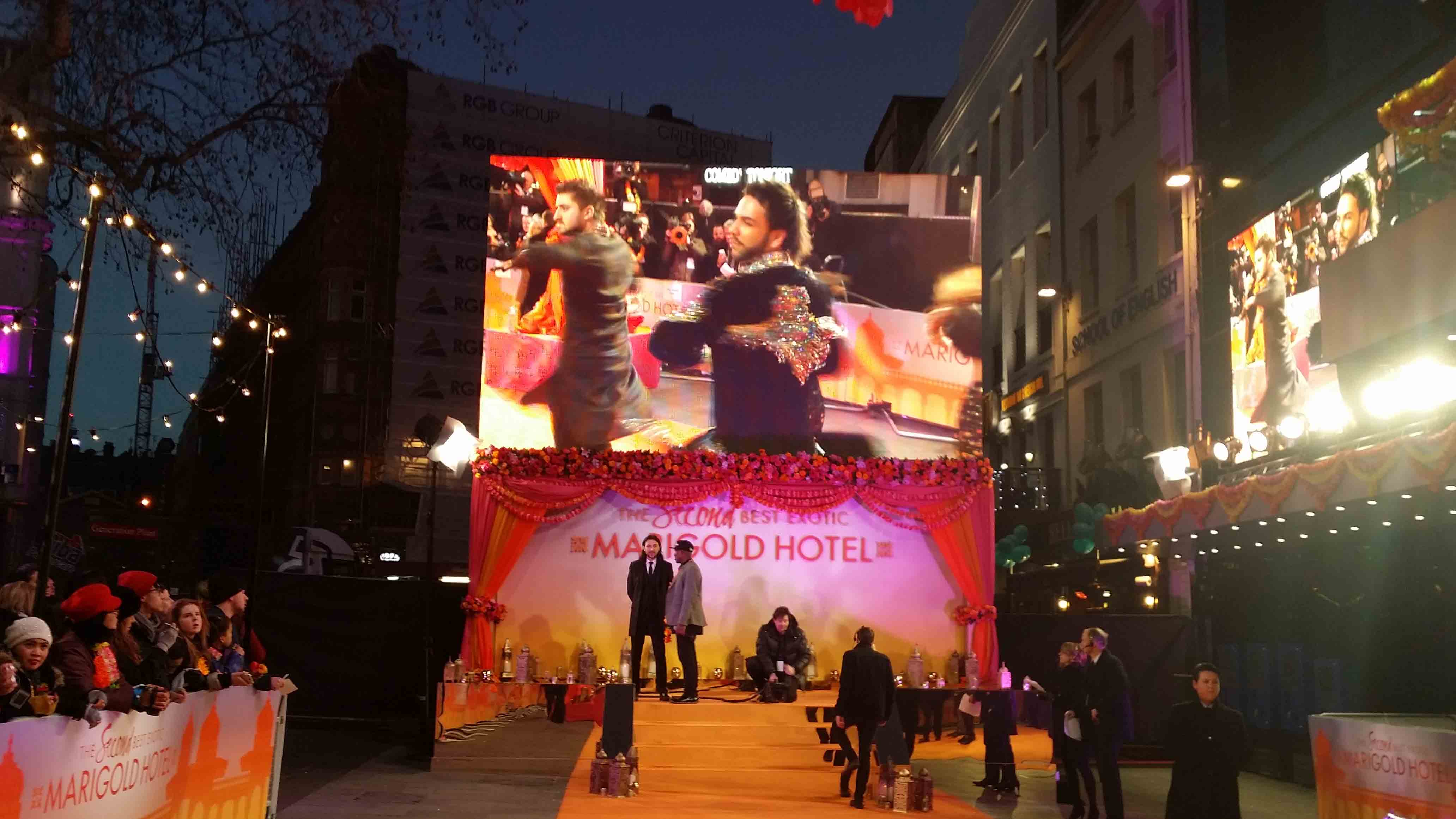 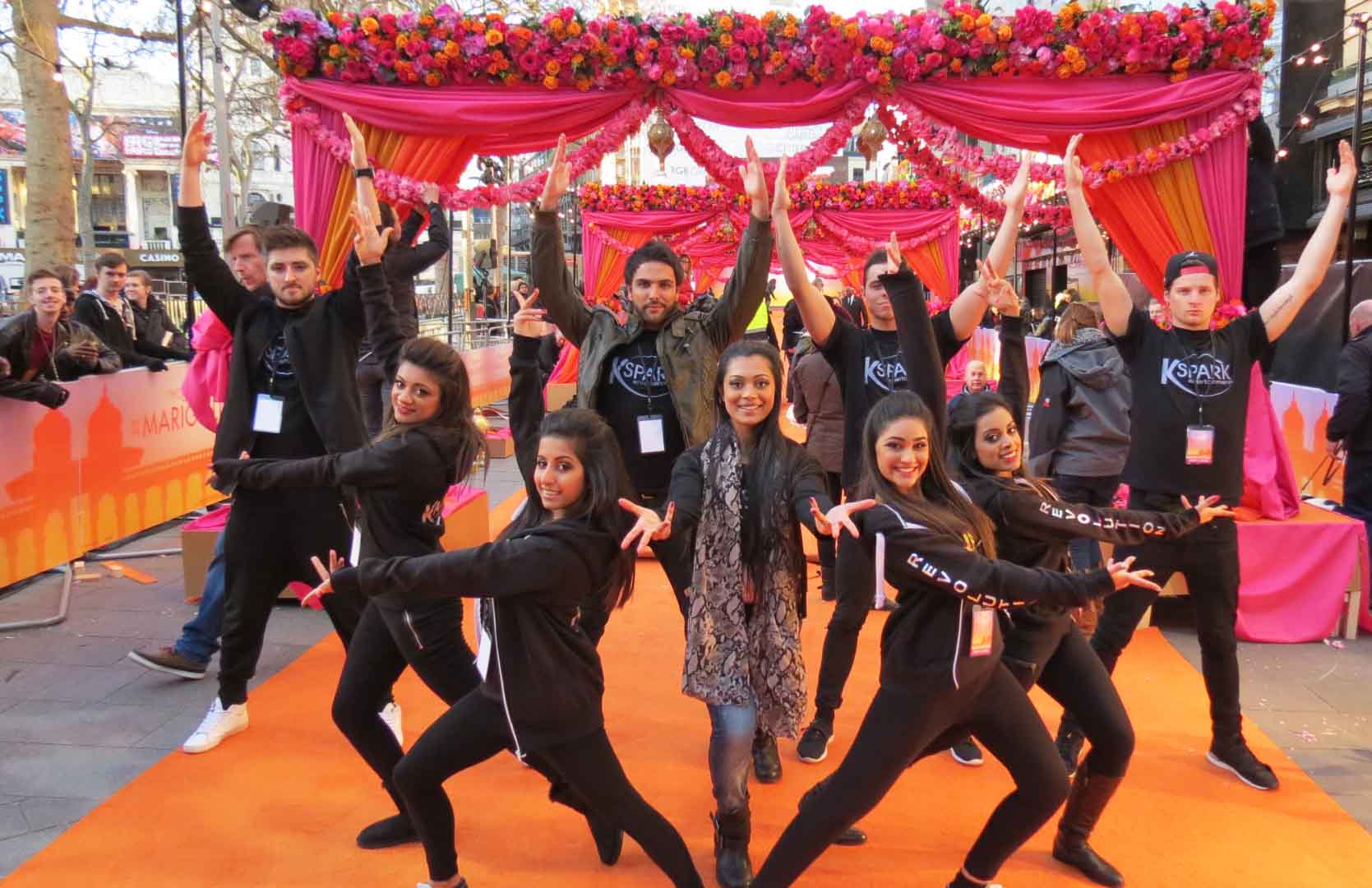 Above: Karan’s Bollywood Masterclass showing a signature pose on the main carpet after their rehearsal infront of the Odeon, Leicester Square. 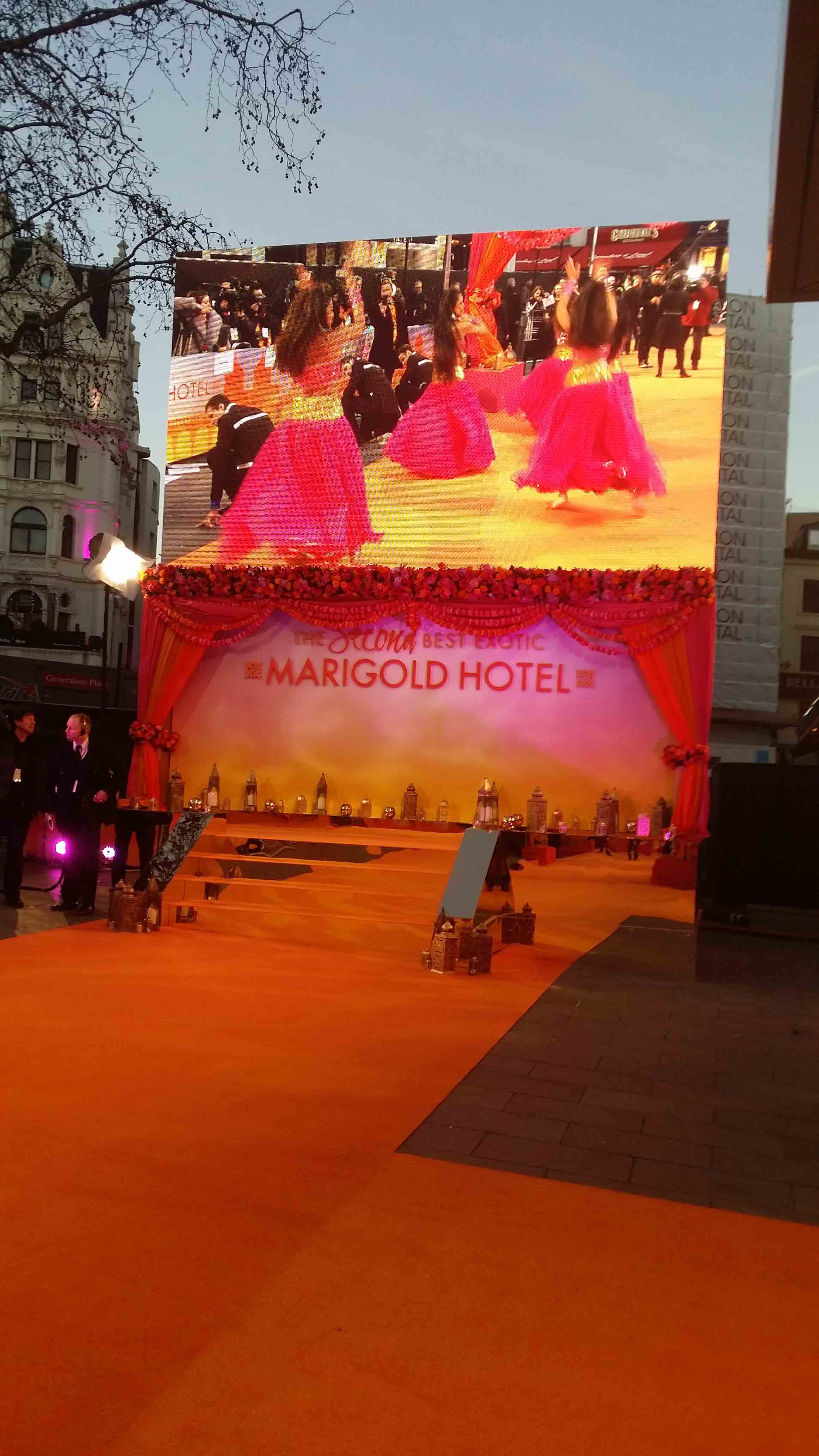 Above: All systems go! KSPARK and KBM Bollywood dancers are in full swing to Jhoom Barabar Jhoom at the Second Best Exotic Marigold Hotel world premiere! 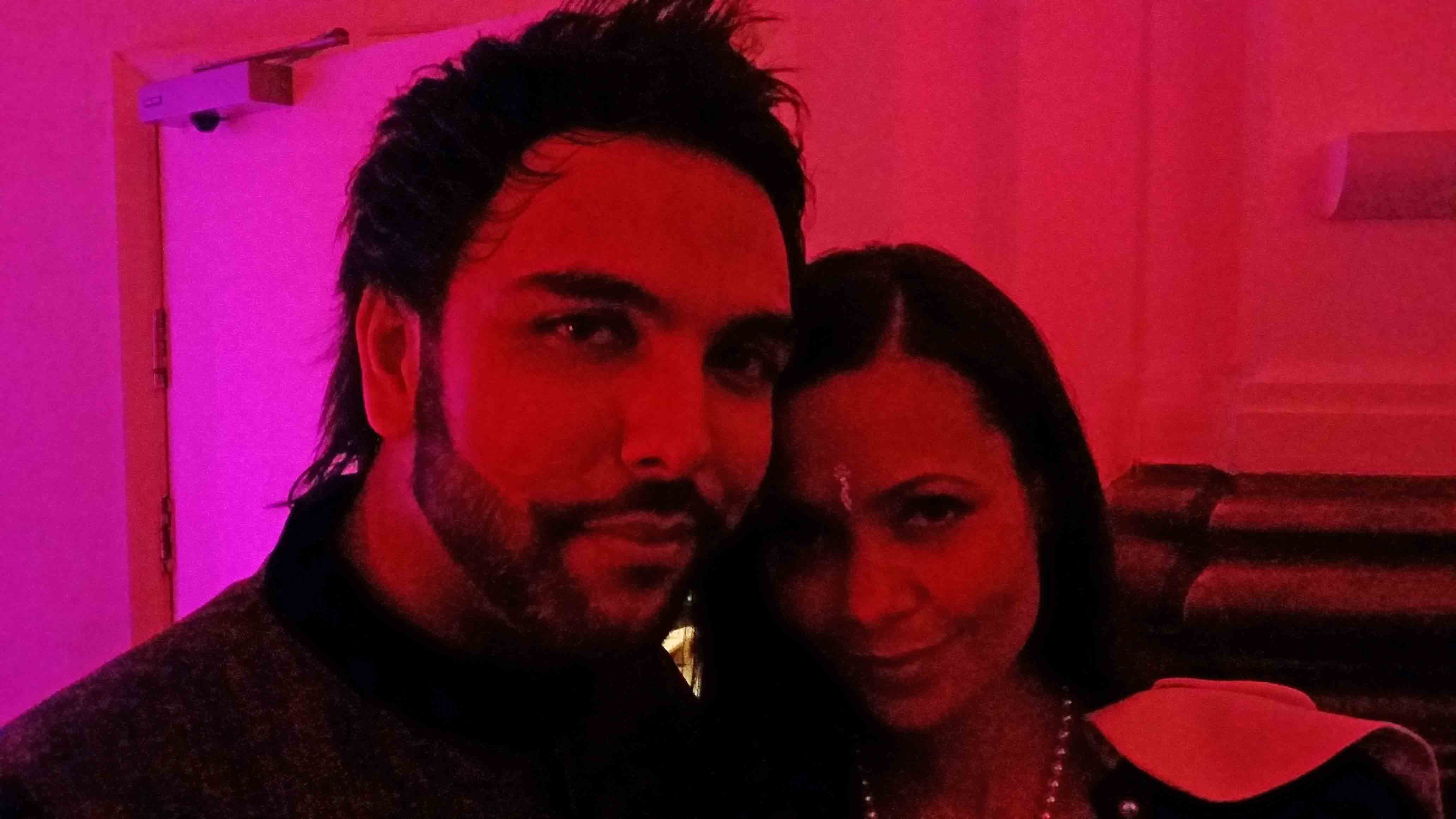 Above: Karan Pangali with the beautiful Hollywood actress Thandie Newton at the Second Best Exotic Marigold Hotel official after party. 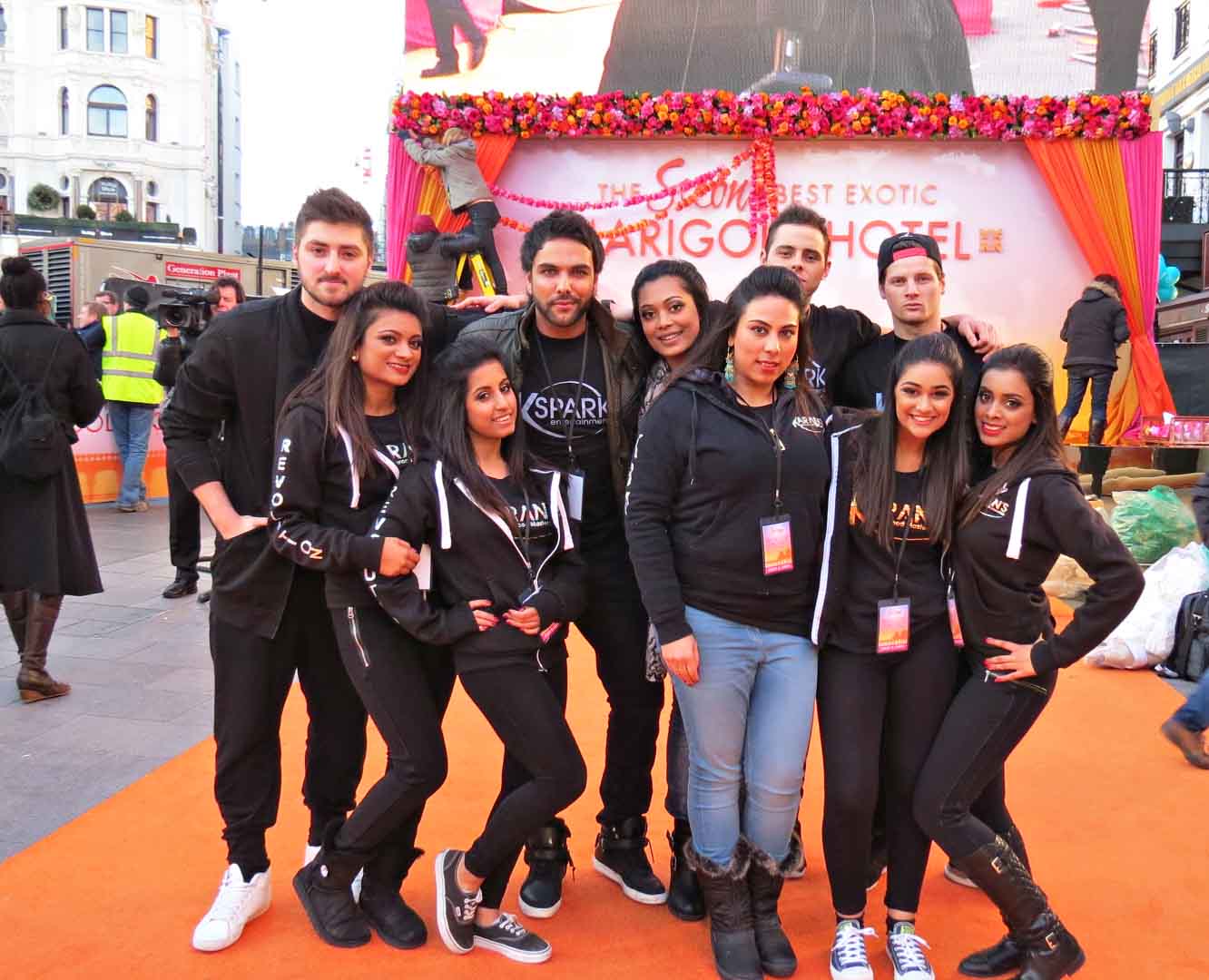 Above: KBM dance teacher and choreographer Nishi Pangali poses with the Bollywood dance champions after a site check and rehearsal. Time to get into costume, hair and make-up!